The Festival will take place again in Civic Park on Saturday June 6 2009 in conjunction with World Environment Day June 5.

For more information see the Octapod site links below:

On Facebook: Friends of the Cultural STOMP Festival Newcastle:

Posted by History Man at 2:43 PM No comments: 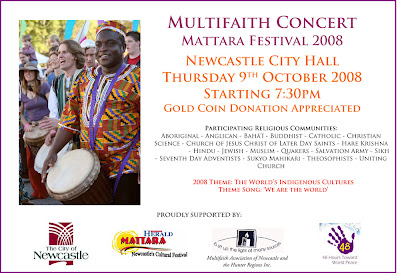 Greetings friends to the 7th such occasion when in spirited unity and diversity we have gathered here at Nobbys to together celebrate the dawning of an autumnal equinox.

In the traditions of Japanese Buddhism the equinox festival is known as Higan, the festival of the “other shore”, the festival that brings to mind enlightenment shining in the seasons and forms of our turning world and welcoming all equally within its warmth.

However it is a rather different “global warming” that is the chosen theme for our gathering here today. As we should by now all be painfully aware, human-induced climate change is underway and carries with it a fearsome potential to devastate this beautifully balanced and wholly inter-connected world we share.

Countless equinoxes have passed with human beings living their lives beside this great river. For the 150 years that the lighthouse has been here at the river’s mouth the coal industry has been the livelihood of so many local folk. Now this has become one of the most significant channels of inflammatory carbon on Earth. Yes, in terms of the veritable fever that is global warming this is now a river of both fire and water.

To state the obvious, to turn things around things will have to change. A huge coal-carrying vessel like the Pasha Bulker being recently stranded not far from here should serve as an appropriately portentous warning. With dangerous weather approaching, ships use echo-location to seek the safety of depth, and metaphorically it is imperative for all of us to do likewise.

Climate change is not a crisis of “environmental management” ultimately soluble by the mere extension of human control over the world around us. In its genuine sense this is an ecological crisis. The word “ecology” derives from the Greek “oikos”, meaning “household” and “home”, and “logos”, meaning “word” and “understanding”. The word-combination opens a homecoming of understanding, a deepening standing in the togetherness that in reality enables and finds all life at home, humanity included.

In mutual depth of meaning ecology naturally echoes the Buddhist term “eko”. Eko literally denotes “changing direction” or “turning toward another”. It signifies openness attentive and conducive to the calling of compassion. The enlightenment celebrated at Higan is none other than this resounding eko of compassion open and altogether. Apart from such compassion there is no genuine understanding, only a homelessness within.

Hence my metaphorical recommendation of echo-location for us all, since eko roundly echoes ecology and both are critically helpful to orient ourselves meeting the challenges ahead. In being deeply at home, richly related to each other and to the wholeness of living Earth, is an endowment of wisdom and resourcefulness appreciative of the true value of belonging. Then let us become who we are and let us realize a future for life in all its wonderfully diverse fullness. Namo Amida Butsu.

Shaku Jo’on Gregg Heathcote
(NB Shaku means “Follower of the Sakyamuni Buddha”. Jo’on means “Pure Music”, describing the way the eko of enlightened mind plays out in our hearing)
Posted by Gregg Heathcote at 11:23 AM No comments: 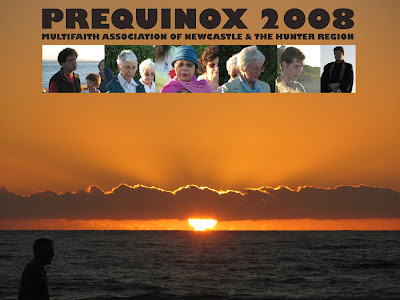 View images from the event here
Posted by History Man at 2:08 PM No comments: 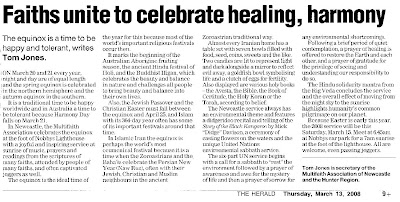 Posted by History Man at 6:51 PM No comments:

Newcastle City Council congratulates the Australian Government on the eve of its historic apology to the Aboriginal Stolen Generations.

Posted by History Man at 8:50 AM No comments:

Greetings friends and welcome to our customary multifaith gathering in celebration of the autumnal equinox, the fifth such dawn gathering here at Nobbys where and when sun, river and ocean meet upon the seasons’ especial point of balance.

At equinox day and night are evenly balanced and all in this world of ours are then literally equal under the sun. Each time we gather here I point out the relevant meaning of the Japanese Buddhist festival of the equinox, known as Higan. The word ‘Higan’ translates as the ‘other shore’ and at Higan the grounding world of enlightened truth and beauty draws the turbulent shallows of our everyday world near, helping plumb the great peace and equilibrium in which all naturally have equal share.

The multifaith movement began in the Hunter Region on 29th October, 1989 when the Newcastle Baha'i Community held the first local Interfaith Service at the Newcastle City Hall.

Our aim is to promote peace and prosperity through an increased awareness of the various religions, faiths and philosophies in the Community. [more]